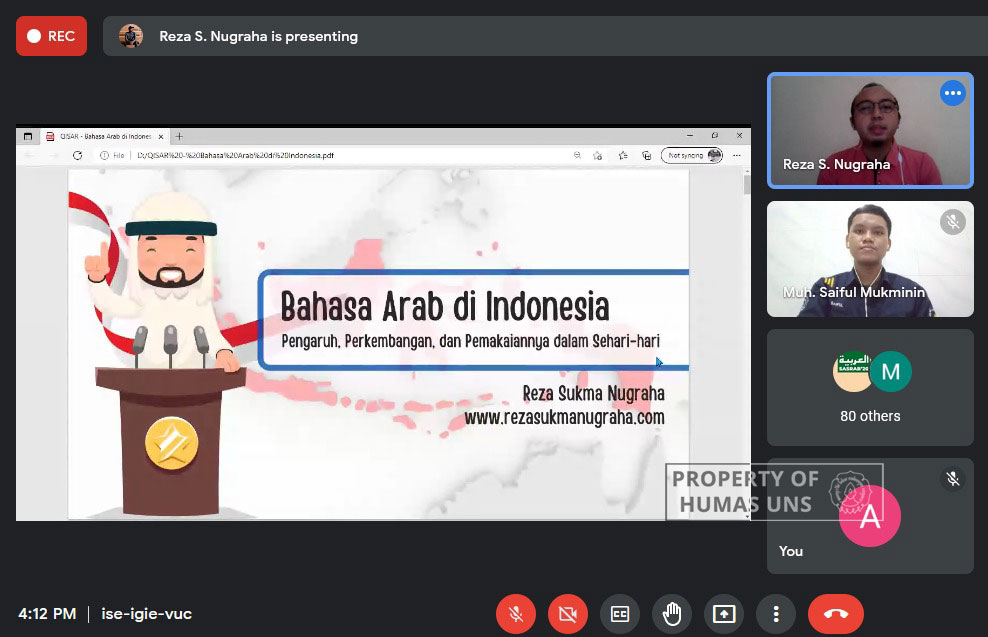 UNS — As a country with the largest Muslim community globally, the Indonesian society is strongly affected by Islamic culture from the Arabian Peninsula, including language as the means of communication. The historical data recorded that in the 7 th Century, Arabs came to Indonesia for trading, and eventually leads to cultural exchange between both significant cultures. Some of the traders even decided to stay behind and taught Islam in the archipelago.

The phenomenon of Arabic Language use in Indonesia was discussed in detail by Reza Sukma Nugraha, S.Hum., M.Hum, a faculty member of Arabic Language and Literature Program Faculty of Cultural Studies (FIB) Universitas Sebelas Maret (UNS) Surakarta on Saturday (31/07/2021) in Student Studies (KRAMA) X BASMA. The event was held online through the Google Meet application and attended by UNS and other university students.

“They started to socialize how the Arabic language is closely related to Islam. For example, in using the terms and Arabic names during their da’wah,” Reza explained.

The numbers of absorbed words also affect phonematic adjustment in the Indonesian language. To this day, the Arabic language is used as a language system, the use of expressions in the form of phrases and sentences, the use of Arabic terms, and the naming of people in Indonesia. Arabic expression in Indonesia is also used as a means of communication, religious teaching, and social or political identity. Humas UNS